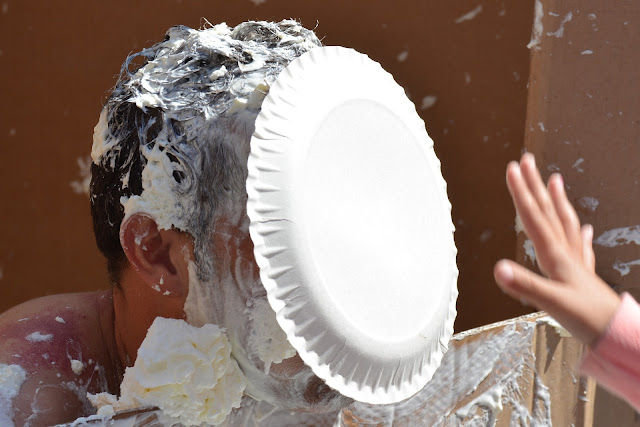 Former twenty-time champion, Head Judge - Millie Musgrave, said she was speechless when this year’s winner was announced. “Ms. Kelly has the tenacity to submit her concoctions every year, but I’m astounded she was able to grab the top award.”

Musgrave went onto say that Kelly had a tough and gritty personality, “Pretty much like her pies.”

The panel of twenty judges deliberated into the early morning hours of January 6th before declaring Kelly the winner. According to an unnamed source, the judges were split on awarding the prize to a pie that clearly was the worst pie in MN.

Musgrave, who was the head judge this year, said, “Kelly’s pie, an Apple Streusel Chocolate Surprise, was barely edible at best. The apples were undercooked, the chocolate was from melted Kit Kats, and the crust was like sandpaper.

“We were under extreme pressure to award Kelly the prize, after she spent hours making concessions with the panel of judges,” Musgrave explained.

Our unnamed source said that Kelly sold her soul to claim this year’s title. It has not been verified, but Kelly promised to clean the house and wash the car for Capitol Hill’s Mayor until next year’s contest. will also babysit four other judges’ children during this year’s Spam Spectacular. Kelly will also be the Chief Toe Nail Clipper at the Foot Fungus Health Clinic held monthly at Dr. Bunion’s Toe and Heel Hut.

Musgrave, who was the final hold out in giving a “yea” to the vote. Told this reporter, “I won’t share the specifics of the deal, but I will have a full stocked pantry this year and I won’t need to buy any groceries.”

During a press conference on January 7th, Kelly explained that it’s about the prestigiousness of being the Pie Champion. “Anyone can bake a pie, but the real talent lies in the wheeling and dealing to become Number One. I now have the power of the pie behind me. With my background, I can go on to become the Queen of the Quiche and perhaps a member of the State Assembly.”

Before this year’s competition, Kelly shared with the local newspaper that she is a former student of the Martha Stewart Cooking Academy in Martha’s Vineyard, she attended Le Cordon Bleu in France and she interned on Julia Child’s cooking show.

“None of this information can be verified, and Martha Stewart doesn’t operate a cooking school,” Musgrave stated. “I doubt Kelly has even been to Paris, TX.”

When asked to defend her resume, Kelly said, “Any way you slice it, I’m in the upper crust now, and how do you like them apples?”