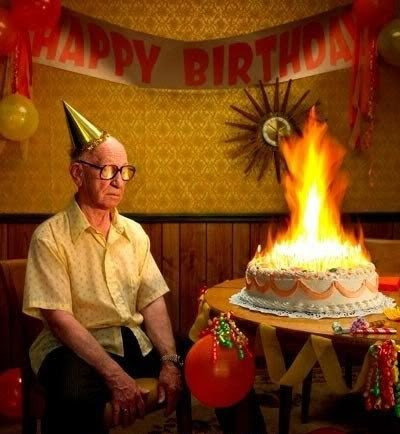 Oh! Another birthday has come and gone. An annual rite of passage. A remembrance of the day when I made my arduous passage through the birth canal, kicking and screaming. For nine months I was doing fine, floating in my isolation womb. Suddenly, BAM!!!, somebody pulls the plug, the water drains, and I’m out of there.

My first experience with the world was a forced eviction from my private abode. Hey, it was rent-free, comfortable, quiet and I could suck on my thumb all day. My Mom was my disgruntled landlord who didn’t even have the courtesy to issue an eviction notice. When I started to speak, she got some harsh syllables from me. There was no “Mama or Dada” as my first words. It was more along the line of, “What the hell were you thinking?” Until I could form words, I screamed a lot and peed in everyone’s face.

People wonder why I have anxiety issues? I was yanked head-first into the cold, noisy world and some stranger in scrubs flung me around the room. No wonder I still get jittery near doctors. Could someone have prepared me? I’d heard Mom’s voice for months and she never dropped a hint. What a horrible surprise party. I requested a nipple of vodka.

Overall, everyone shares the first moments of life the same way, unless, you’re surgically removed. Then, you’ve gotten to escape being squeezed like a watermelon through a pair of pantyhose. I’ve heard that Caesarean babies always look prettier. Of course, they do. They weren’t born under intense pressure.

No wonder I was wrinkly and looked pissed off. I’d worked like an Appalachian coal miner, just for a first series of bad photos and a stupid skull cap. Put me back, I’ll wait until I have teeth for a perfect smile and I don’t need cucumbers for my puffy eyes.

This trauma is literally our only birthday. When we observe the date going forward, it’s just the anniversary of our arrival. When anyone wishes you a “Happy Birthday,” remind them it isn’t your actual birthday. It’s horrific to imagine experiencing birth again. At this point in life, I’m not traveling in any tunnel I can’t drive through in my car.

After the initial birthday, we’re all on our separate paths. We can grow up celebrating with beautiful cakes, pony rides, face painting, pizza parties or Bobo the clown and his strangely pornographic balloon sculptures. Getting older is an individualized joy ride.

At fifty, I wanted aging to stop. I tried to commiserate about getting older, but people told me, “age is nothing but a number.” Yeah right, it’s the number that tells me how freaking old I am. There’s also the wonderful adage – you’re only as old as you feel. But what if I feel like a wrinkled, hairless cat?

I hate when someone asks “How old are you?” If I’m in a good mood I usually say “I’m between Pampers and Depends.” I really prefer not to belabor the topic so I’ve come up with some zingers that usually shut down the conversation. They’re very handy to use when you’re feeling like your birth certificate looks like the Dead Sea Scrolls.

Here are replies when someone asks how old you are:

·      I’m so old I knew Moses when the ‘burning bush’ was just a medical condition.

·      I’m so old my first Christmas parade was three kings and a drummer boy.

·      I’m so old I told Shakespeare his new play was much ado about nothing.

As every anniversary of my birthday arrives, I’m still kicking and screaming like it’s my debut. Growing older has made me wiser. I know if I really work hard I can slow down my internal clock. I’m trying to undo the process, by reversing my treadmill. Running backwards is not a natural motion, so I keep being flung off. To say, I’ve hit a wall, is literally true. At this age it’s all about the number, and that’s 911!