The White House Night Before Christmas 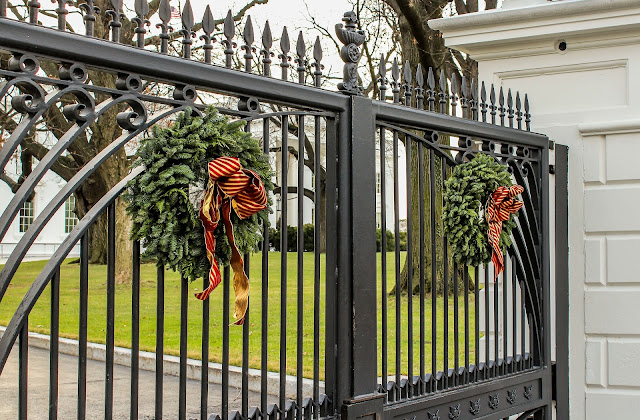 ‘Twas the night before Christmas, and all through the White House the Impeachment Trial is looming for the lyin’, orange louse.
Don Jr. is saying “No Quid Pro Quo” like the rest.
Melania’s locked in her bedroom, telling everyone Be Best.

Ivanka’s stuffing stockings with her cheap knock-off shoes,
while Rudy’s yelling Biden dirt, with his nose glowing from booze.
Kelly Conway is stoking the flames of hate,
while Eric in his onesie hopes Santa’s not late.

When out on the South Lawn there arose such a clatter,
the Secret Service rushed to see what was the matter.
Taking proper precautions, safety’s always chancy,
House Dems were on the grounds with their leader Nancy.

They held tight in their fists the Impeachment Articles – two,
It’s Donnie’s gift for his behavior.
The Constitutional thing to do.

“Come out of the Oval Office and surrender yourself.
We know of your corruption from the whistleblower - Elf on the Shelf.”
They yelled, shouted and called him by name.
“Come out here crooked Trump. Admit to your shame!”

And then, in a pounding they heard on floor, out came dumb Donald through the balcony door.
His eyes were all puffy, a combover swirled on his head.
“Go away all you traitors, I’ve got Stormy in bed.”

Kentucky fried chicken was stuck in each tooth.
With a half open bathrobe, he’s the model of uncouth.
The moon on his breast, showed his man boobs were sagging.
The Democrats ignored him, though his tongue kept on wagging.

He said he was brilliant.
He has the best mind.
But, Nancy and the House know he’s racist, petty and unkind.

Nancy said, “We came here tonight on this Christmas Eve.
Pack up your office, your family, your cronies and leave.
We call on Pence, Mulvaney, Barr and Bolton,
Get out of DC. You’re all so revoltin’.”

“The country’s in chaos, so do the right thing.
Go back to Trump Tower, and we’ll fumigate the West Wing.”
Donny just glared, they saw the white ‘round his eyes.
“I’m going back in to enjoy my Mickey D’s fries.

His morals are lacking, no crimes he’ll report.
He turned in a jerk and let out a snort.
The Democrats called as he stumbled from sight,
“We’ll see you on trial. Merry Christmas you traitor, have another sleepless night.”