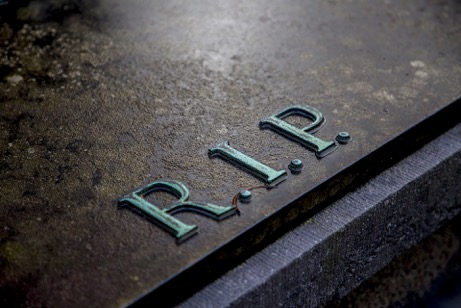 What people fear the most after speaking in public and being trapped in an elevator with Harvey Weinstein – is death. Tucked away in a compartment of our brain labeled “Denial” resides a black-robed figure waving a scythe. We know who it is, but we’re just not comfortable waving back.

The acknowledgement is too uncomfortable. Let’s avoid any reference until we are forced by circumstances we can’t avoid. We all know the words are Dead, Death or Die. There is such a tremendous fear we skirt around the topic using phrases that don’t mention the three “D’s.”.

If we don’t utter the words it won’t deliver the real impact. Sweeten the bitterness of it all with a clever expression. An innocuous comment and we remove mental images of corpses and coffins. They’re not “DEAD,” they’re just not here anymore.

We’ve all heard them, and used a few. It sounds so final and tragic to say “dad is dead” rather than “dad has departed.” What’s so bad about dad taking a lengthy trip. Bon Voyage daddy, but remember he’s bought a ticket on the Titanic and it’s a one-way trip.

When we really think about how many ways we tell people about someone’s death it’s most always a euphemism. We attempt to soften the blow, but don’t we really sound silly?

·      “He just bought the farm.” Really? He never mentioned he wanted to be a farmer. In his current health, he should be saving his money. I know the only thing getting planted at this farm.
·      “She just cashed in her chips.”  She never looked like a gambler, but I hope she won the jackpot. I guess she’ll be able to afford a big funeral.
·      “He’s going to his just reward.” He seemed like a really nice guy. Couldn’t he receive the award when he could enjoy it. A new 60” flat screen won’t get good reception from the Veteran’s Cemetery.
·      “She’s going to meet her maker.”  Wait a minute, she’s going to Boca to visit Larry and Sadie Applebaum? I thought she couldn’t stand her parents.
·      “He’s gone to a far better place.”  Unless he’s sipping a café au lait along the Siene, or watching the sunset from a cliff on Santorini, I don’t see how it could be better. Forgive me for being so presumptuous, but being shoved inside a satin-lined box is not a better place. Have you checked out the view?
·      “She’s resting in peace.”  If what you’re telling me is she’s dead, then I hope peace is involved. I’ve never met a rowdy corpse. The police are not getting any calls to stop the loud parties at Forest Lawn.

I know sometimes the truth hurts, but so does grief. We don’t need to sanitize death. We should speak concisely. Communication doesn’t need the euphemisms or colloquialisms. We’re all going to die, so get comfortable with saying “dead.” If you can’t be honest then just go ‘take a dirt nap.”