TATTLE TALES: Lock Her Up!! 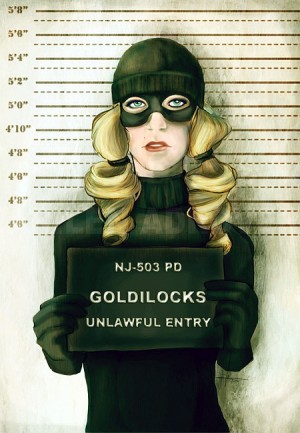 The Enchanted Forest Police issued a restraining order today against a Gold E. Locks. The plaintiff, Mom E. Bear filed the complaint after finding the culprit in her home. The incident involved destruction of property.

The protective order demands that Ms. Locks not wander into the Bear’s neck of the woods at any time. The cause stated on the order was – Breaking and Entering, Private Property Destruction, Smoking in Bed, Lounging in the Bear’s Bedroom, Porridge Confiscation and Stalking.

Deputy Jack B. Nimble prepared the order after interviewing the Bear family at police headquarters. According to Mom E. Bear the family was at Ted E. Bear’s picnic when Ms. Gold invaded their modest split-level home in Hundred Acre Wood.

Official record transcribed by Miss Tuffet – stenographer for the Chief of Police.

Mom E. Bear – “We were returning from an afternoon picnic when we noticed our front door ajar. I always lock the door and place the key around my neck – I don’t have pockets.”

“It was alarming to see our home open to any wandering creature. We’ve had several drunken dwarves asleep on our lawn and once Tinkerbell was trapped in our bug zapper, but we’ve never had anyone break into the house.”

“I offered to investigate. Dad E. Bear was stuck to my back like honey. We crept inside and the first thing we saw was our furniture had been broken.”

“The petite psycho sat in all our chairs, and broke our sweet Babe’s rocker. Strands of blonde hair were all over our sofa, and she must have put her feet on the cushions. Patent leather stains covered the fabric. Talk about grin and bear it. I’d just finished my Spring cleaning after Winter hibernation. Things get pretty dusty.”

“I checked the kitchen and it was a disaster. Porridge and honey where everywhere ­– even stuck to the ceiling. Our big cauldron was boiling in the fireplace. I removed the lid and was horrified. Peter Rabbit had been shoved into the pot and left boiling. Although tragic, I thought of adding some chopped carrots and celery for fresh rabbit stew.”

“We weren’t dealing with any normal woods tramp like Red Riding Hood. I grabbed a meat cleaver and headed for the stairs. Dad E. seemed a bit hesitant to follow me, so I knew I needed to take the situation into my own paws.”

“When I reached the top of the stairs, I panicked. There was a cloud of smoke drifting out of our bedroom. I ran into the room expecting to see flames, but was more shocked to find Gold E. Locks draped across Babe E.’s bed.”

“She was lounging in a blue pinafore, smoking and drinking. What a sloppy drunk. Loudly, she hiccupped, giggled and then blew a smoke ring. ‘Oh it’s you,’ she said slurring her words. I was speechless and let out a grizzly snarl.”

“What are you doing here?” I demanded to know. ‘Just chill like Gentle Ben,’ she advised. ‘I’m here to see Dad E. Bear. I brought him a present. A box of bear claws.’ I was moments away from ripping her limb to limb.”

“Dad. E. crept in the room looking a little sheepish. ‘You shouldn’t be here,’ he growled. ‘But, you never came to see me. I won’t be ignored!’ she yelled.”

“Dad E. looked in pain, like he needed to shit in the woods. He explained he’d helped Gold E. Locks find Bo Peeps cottage. She was so grateful she invited Dad E. for a drink with her and Peep. Over a mug of Grimm Ale, Gold E. made a pass at Dad E. She has a reputation for liking strong black bears.”

“Until her forced entry, I wasn’t aware of any situation, but, she’s been stalking Dad E. everywhere he goes –  the butcher, the baker the candlestick maker. Dad E. told me he’s seen here lurking at the edge of the forest enticing him with an open picnic basket. She’s also disguised herself as Winnie the Pooh and Teddy Ruxpin trying to get into the house.”

“I forcibly removed her from our property and told her the next time I saw her she’d be tasting my bear claw. This bleach bottle bimbo will not ruin our ‘Happily Ever After.’”

The Bear family has retained the legal services of Tweedledee, Tweedledum, and Associates. A warrant was issued for Gold E. Locks in connection with the stewing of Peter Rabbit. Ms. Locks remains at large somewhere in the forest. All residents have been warned not to interfere in the search. The Three Little Pigs are on the case.