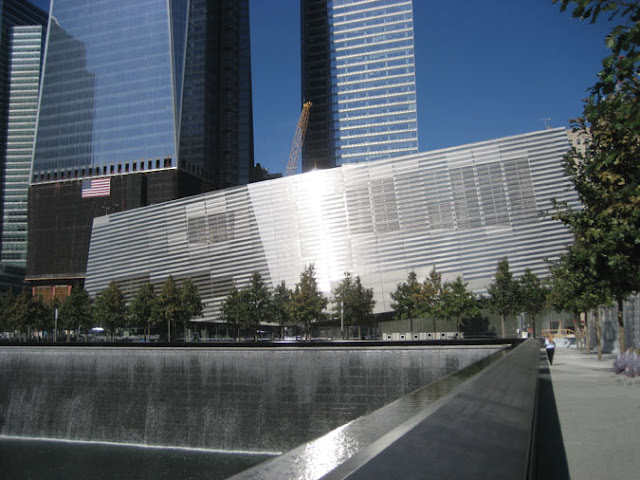 This September marks the 14th anniversary of 9/11. The day when the world watched in shock as the terrorists attacked the US, destroying the World Trade Center’s twin towers, damaging the Pentagon, and crashing a passenger plane into a Pennsylvania field.

This act of terrorism killed almost three thousand individuals, decimated New York’s Financial District, and left the country in panic and fear. It was a tragedy that resulted in the largest loss of life from a foreign attack on American soil and the greatest single loss of rescue personnel in our history.

Time can help diminish the pain of a tragedy, but we “never forget.” The act of destruction, devastation and terror of that day is etched in our minds. It’s one of those horrible, defining days in our country’s history like the assassination of President Kennedy.  We all remember where we were and what we were doing when we heard the tragic news that planes crashed into the twin towers. 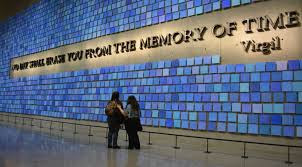 It is so ingrained in our psyche that it seems hard to believe that there are children and teenagers who are learning about 9/11 after the fact.  As time passes, and we move further away from that historic day, we have to be vigilant and remember what we lost and what we learned - the lives of thousands gone in an instant and the heroism and bravery of citizens in the face of disaster.

It is important to create physical reminders of historic events even when they are tragedies. That is why we build monuments and erect statues. We need to be able to witness history. In May 2014, the 9/11 Memorial Museum opened to the public. The museum is an educational, immersive and somber remembrance of a day that altered our world.

As written in the museum map – “The National September 11 Memorial Museum at the World Trade Center bears witness to the terrorist attacks on the September 11, 2001 and February 26, 1993. The Museum honors the nearly 3,000 victims of these attacks and all those who risked their lives to save others. It further recognizes the thousands who survived and those who acted with extraordinary compassion in the aftermath. Demonstrating the consequences of terrorism on individual lives and its impact on communities at the local, national, and international levels, the Museum attests to the triumph of human dignity over human depravity and affirms an unwavering commitment to the fundamental value of human life.”

I had the opportunity to visit the museum in July. It was a touching, emotional experience, but so worth journey. The museum occupies what was the footprint of the World Trade Center Towers. The exhibition space is 110,000 square feet and lies 70 feet below ground. You enter the museum and travel through a concourse with an Introductory Exhibition as you descend into the foundation of the destroyed skyscrapers.

It is eerie and a bit surreal to know that you are standing on what was the foundation for these giant buildings. It is what remains of where thousands of individuals lost their lives – hallowed ground. The museum maintains a reverence in its observance of the tragedy. There are huge pieces of twisted metal, beams, and girders that display the violence and destruction of that day.

A 58-ton stairway, which is known as the ‘Survivor Stairway” delivers an emotional impact. The stairway was a route many used to escape after the attack.  There is a fire truck and an emergency vehicle showing the damage imposed as the towers collapsed.  These items give you a glimpse of the devastation of that day. 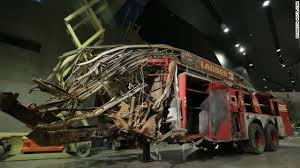 The September 11, 2001 Exhibition takes the visitor through the incidents leading up to the attacks, the day itself and the aftermath. It is visually stunning, informative and it brought me right back to the visceral impact of that day. There are many items taken from the site that provide the human side of the tragedy. Personal effects like shoes, glasses, and a wallet exposed to show melted credit cards make for a haunting reminder of those who became victims of senseless terrorism.

The museum is there to honor the victims, the survivors and their families. An enclosed space in the center of the museum called “In Memoriam” features photos, supplied by the families, of the 2,983 individuals killed in the September 11, 2001 and February 26, 1993 attacks.

A place for quiet reflection, this is by far the most touching, emotionally charged portion of the museum. In the presence of walls covered with the faces of the people who died, you’re struck by the unfathomable loss. You can’t truly quantify the number 2,983 until you walk through the space. 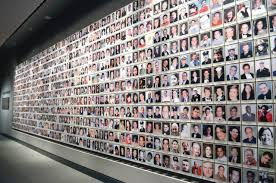 A darkened room fills the center of the display. Here a non-stop roster of the victims plays. It features their birthdates and personal information. It honors the victims and reveals their personalities. It humanizes them and takes them off just a list of names read every year on 9/11.

There are also display cases where family members provide personal effects, on a rotating basis, of the loved ones they lost. These items show their interests, their hobbies and talents. What an amazing tribute to the victims who disappeared in the collapse of the twin towers.

Above the museum in a tree-lined park the twin Memorial pools, which set where the Twin Towers once stood, feature the names of all the victims engraved in bronze panels. The pools contain the largest manmade waterfalls in North America. They provide a tranquil beauty to a space that experienced such devastation. 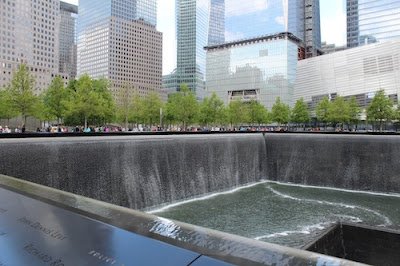 A visit to the 9/11 Memorial Museum and a walk to view the reflecting pools is solemn and unforgettable. It is a site that everyone should visit. It not only educates and reminds us of a day that changed our world forever; it exemplifies the resiliency of the human spirit and that from utter destruction new life can begin.